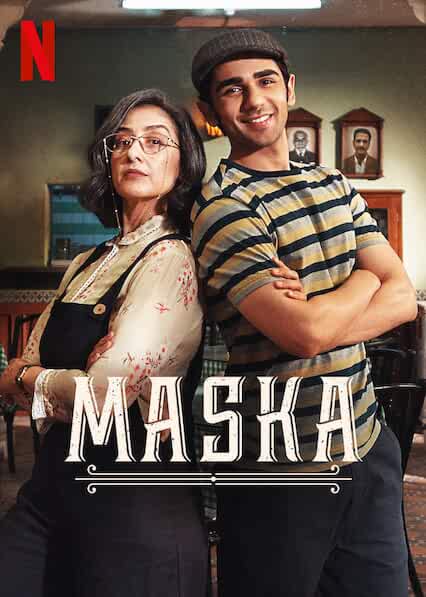 As you could figure out by now, the storyline for Maska is anything but groundbreaking—it has a simple plot san any unnecessary and pretentious twists—but is filled with innocence and honesty. The film also touches upon the rich legacy of the famous Irani Cafés in Mumbai. These cafes, which were once iconic to the commercial city, are now losing the race to the Starbucks and CCDs of the world.

The film uses Café Rustom to delve deep into the nostalgia around the Irani Cafés of Mumbai. Café Rustom, as with any other Irani Cafés in the city, is not just a place which serves the iconic Bun Maska and Irani Chai but holds numerous personal stories of people who frequent the iconic eatery. The café holds a special place in the hearts and minds of customers, specially the elderlies in the city, for everyone have memories that go back a long way in the past.

This philosophy of memories and holding on to them close to one’s heart comes together beautifully when Persis (played by Shirley Setia) tell Rumi (Prit Kamani):

This makes the film for me. Such a powerful thing to say. She had me with this line. Hats off to the dialogue writer.

Even though Persis has a short screen time, but her character has a significant role to play in the film. Besides, she gets to mouth the best and arguably the meatiest line of the film.

“Ah, books, I tell you, can be quite inspiring at times.”

Prit Kamani, as Rumi, is charming. His innocence will linger with you for long. And his chemistry with Persis is spot on, and the latter is also the reason why Rumi finally decides to take forward the rich family legacy and rejects his original idea of selling the property at a whooping price.

The film’s anchor, however, is Manisha Koirala whose portrayal of the stoic and stubborn Parsi lady holds the film together. Her character, typically an old-school widowed woman who is protective about her family and their rich heritage, wants her son to follow the footsteps of his father and take over the reins of Café Rustom.

Some of the sweetest moments of the film, as well as some of the unsavory exchanges, are between the mother and the son. The other character that deserves special mention is that of Jaaved Jaffrey, who plays the dead father. His portrayal of a Parsi man is funny to say the least, which is augmented by quirky one-liners like:

“Gravity is a myth, the earth sucks”!

Neeraj Udhwani, who is the director of the film, serves an old wine in a new bottle all right. But there is hardly any room for complain when the wine is prepared and served with utmost love and care. The film, despite its cliché plot, offers a degree of freshness (thanks to the amazing cast) which is a big takeaway in addition to a sweet feeling of happiness at the end.